Tenebra - Out there in the Wild

So it's been a couple weeks since I released Tenebra. The first few days were stressful. I was constantly checking my mail inbox and hitting the 'refresh' key on the comment section pages where I uploaded the game. What a relief! It looks like the game actually runs. So far no crashes and perf issues!
I contacted a few game journalists but wasn't surprised to get no reaction at all. I then decided that maybe the contemporary thing to do with a game like this to have youtube exposure.
I wrote a few mails to some of the 'let's play' youtubers. One of them who has a lot of subscribers gave Tenebra a chance (and a thumbs up). So I ended up with roughly thirty thousand people who watched the game within the first 14 days after the release.
Two days ago there was a big spike on the view stats page of moddb. I can't track down what exactly happened but I'm super happy.

Indiedb is hosting the annual 'Indie Game of the Year'. If you like Tenebra it'd be awesome if you could hop over to indiedb and vote for it. Thanks :) 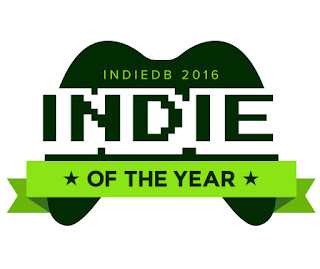 PS: Holy cow. I just spotted a full article about Tenebra on Rock Paper Shotgun!!
Posted by Ivan Simoncini at 12:42 AM No comments:

Today's the day!
It's been a long journey. A lot has happened since my last blog update. I was able to track down the showstopper bugs I mentioned in my last post. I did another round of beta playtesting and got a ton more feedback. Mostly on game content - so nothing scary.
I decided that it would be worth taking some more time and do another polish pass.

Needless to say that developing Tenebra wasn't always easy. And (of course) I'm a bit nervous if people will like it. It'd be awesome if the game would find an audience.

So what's next with Sunspot Games??? I got an idea for a new horror game and a working prototype for a physics game that's in dire need of a cool artstyle. And I got a family that really, really would like to spend time with their dad. I think that's what I'm gonna do first. :)
Posted by Ivan Simoncini at 12:55 AM No comments:

After crushing the last bug almost two months ago with the help of a friend (a shader bug) the game has been sitting almost untouched on my hard drive. I couldn't seem to find one free week-end. That was especially frustrating since the game's pretty much done.
I spend the last two weeks going through the game folders, cleaning up unused content, temporary files and all sorts of embarassing things. Then I tried (and am still trying) to find the best way to release the game, hopefully before Christmas. The thing that's been bugging me most is that I feel that there should be another small PR push before I release it. I haven't decided yet. See... the game is rather short. If I'll release more screenshots or a trailer I'll probably show too much. Nobody likes to see spoilers. (Hi, Terminator 5)

I started doing a pre-release test. I bugged friends and testers to download and run the game for the first time on their machines at home, making sure the installation instructions are easy to understand and that it actually runs. It took some balls to do this, I'll tell you. There was no more excuse. I couldn't stand in the back as usual and say things such as: 'Ah... yes, that part sucks. I'll fix that later.'

The feedback I got so far is very encouraging. Maybe the damn thing turns out to be good after all.

And here's some good news for you: I decided to release the game for free!


Update: Rats! I should have known, being part of the industry for so long now. The pre-release test didn't go as smooth as I was hoping. Some major issues popped up. The game doesn't run on all hardware. At this point I got an idea what's going on but it's too early to tell. I don't have the manpower to do proper Q&A and I certainly don't have a testlab where I can run Tenebra on different machines with different specs. But there are things I can do.
Here's my plan:
- Try and track down the issue and fix it. It might have to do with Tenebra's heavy reliance on HDR. Annoying, but certainly not the end of the world. I might have to go back and re-light the entire game and tweak the post-processing effect filters.
- Do another pre-release test with people who're willing to help.

Someone I admire once said: Whenever you feel like giving up all you need is one person who's close to you to encourage you. Might be your partner, a friend, a relative...
Luckily I got more than one. So here's a big 'Thanks' to you! You know who you are.

Posted by Ivan Simoncini at 6:20 AM No comments:

I spent the last few weeks with gametests and reading up on how to introduce an indie game. So I have a basic website (but no domain name yet), a dev blog, a trailer, screenshots etc. What I don't have is a wallpaper for Tenebra. So this will be sort of 'the face' of the game which people will hopefully associate with the product. This sounds darn important. Luckily I like doing these. And since I already had a pretty good idea what it should look like it didn't take too long to come up with a few variations. I sent them out to friends and did a little poll.

Here are two of them: 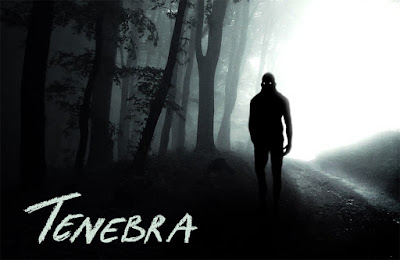 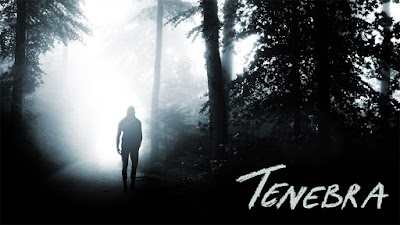 I ended up using the top one since the center piece (the figure) is bigger and the thumbnail is easier to read.

I'm about to do the announcement on some indie game sites soon and planning to do a closed beta. Here's another thing: I have what you might call digital stagefright.
Posted by Ivan Simoncini at 7:57 AM No comments:

I actually have a degree in music - so I thought creating sounds and music for Tenebra should be the easiest bit and I was looking very much forward to it.
Initially I wanted to have the typical ambient low rumbling noise soundtrack rather than actually having 'real' music. This is pretty easy and also cheap to do and it usually works very well for a horror game.
However, after a while I was getting really worried about the whole arc and the mood of the game. So here I have a very dark visual look, a mature and horrific story and I added a low and depressing scary soundtrack underneath. Playtesters felt exhausted and drained pretty fast.
I tried several things with timing, the visuals and eventually also decided that I should try different things with the music as well.
I'm not equipped with the proper equipment to whip up an orchestral soundtrack. What I had at hand was a inexpensive small handheld audio recorder (a Zoom H1 from Sony for about a 100 USD) and an old piano. So I sat down and started improvising, not only doing scary tracks but also uplifting ones. I added a bit of reverb and put one of them into the game, replacing the scary ambient one.
I was excited! This was an easy way to add (the much needed!) contrast to the game. In my opinion it gets old rather quickly if you, let's say, add sadness to sadness.
The other thing I did was to contact a friend who is a a great guitar player and composer. He said he'd love to do music for games for a change and contributed some awesome tracks.

Here's an old/new comparison. The first track is what I initially had:


Here's the second take which I ended up using:

Don't get me wrong - there's still plenty of noisy low rumbling. But there are airy, light tracks as well.
Posted by Ivan Simoncini at 9:32 AM No comments:

Developing Tenebra - What's the scariest thing you can imagine?

Tenebra is a horror game. So obviously I wanted to have one or more creatures. I was worried...
A co-worker once told me:
'I wish I could 'un-watch' all the horror and sci-fi movies I have ever watched.'
He continued with a sad face:
'I haven't watched a single movie that scared me in the last 15 years!'
He didn't tell me this to brag how tough he is.
This friend is an amazing concept artist. He said it's hard to come up with a unique creature design these days. We might have seen every possible claw/tentacle/teeth variation in the last three decades of movie and gaming history. So to make a monster even scarier it's probably a dead end to just add a 2nd row of teeth.

When I started designing my creatures I did the smart thing, of course: I opened up my modeling tools without having any plan and skteched out a bunch of silhouettes, hoping to find something cool by chance. You'll get what you'd expect: Some random shapes! The most interesting thing about these is that you can't tell what they are. 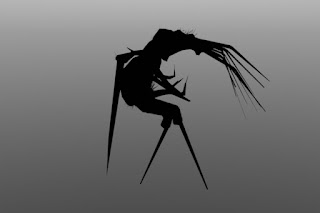 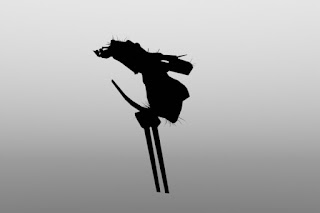 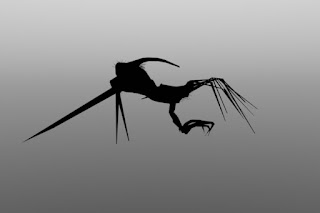 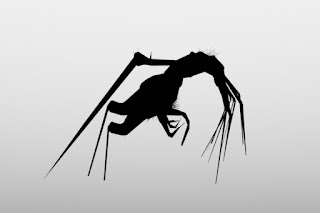 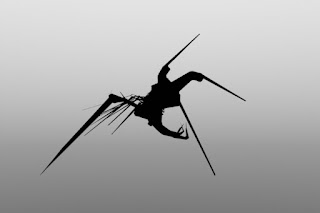 Alright, Plan B:
So I sat down and asked myself: What is the scariest thing I could imagine encountering alone at night in the woods?
It'd be the silhouette of a naked man. (Try to imagine that. I dare you!)

What I always liked about the Silent Hill creature design is how symbolic they are. They're also more grotesque than repulsive. The Pale Man in Guillermo del Toro's Pan's Labyrinth is also a very successful in that regard: 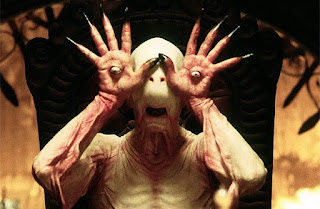 So I changed my approach and came up with creatures that are based on human shapes. They also tied in with the story (please see last post).
Playtests were much more successful after that. Easier to read and more disturbing. I even decided to tone down in the genital department after the first round of feedback.

Posted by Ivan Simoncini at 12:53 PM No comments:

Tenebra is inspired by true events. Developing the game must've saved me a fortune in therapy bills. Let me explain.
Around the time I started working on Tenebra a close friend of mine told me her story. The things she told me, the stuff that happened to her - it was so utterly horrific that I wouldn't believe them at first. It haunted me for months (and it still does). I asked her for permission to use part of what she experienced in Tenebra.
I also started reading articles about serial killers, psychopaths, antisocial personality disorder and other fun subjects. Tell you the truth, I was worried after a while that this depressing research would affect me (me being a hopeless optimist!)
I do believe that ultimately this was the energy that sort of fueled the game development and drove me forward. I was about to give up multiple times.
I'm glad I didn't. In a way it feels like it's a story that wants to be told.

Posted by Ivan Simoncini at 8:54 AM No comments: